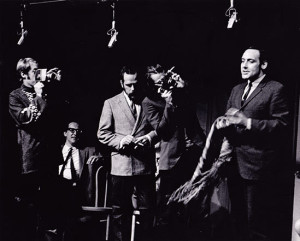 As we continue to research The Committee and interview members of its cast and community for our documentary film, it’s become clear that we are truly building the airplane while we are flying it. When we started, we imagined that our story would be a straight-forward, feature-length, “talking head” style documentary, with a heavy reliance on archival material.

Instead, given the nature of what we’ve uncovered in our research, we’re now producing the project as an episodic documentary, currently structured to be told in five parts. It is our intention not only to tell the story of The Committee, but also to shine a light on the particular joys and struggles of the individuals involved, and put their achievements in the context of their time.

We recognize that this is an ambitious vision. To help us toward this end, we have recently formed two important partnerships. The San Francisco Film Society (SFFILM) has taken us on as our fiscal sponsor, a partnership that will allow us to receive institutional grant funding and tax-deductible donations from individuals. This fiscal sponsorship is a key tool for fundraising and we can’t wait to introduce our project to funders, individuals and foundations alike.

Our second partner – Ninth Street Independent Film Center – has accepted us into their Incubator Program, which will allow us the use of an office space and screening room subsidized by The San Francisco Film Commission. We will move into the office, located in San Francisco’s Civic Center, later in the fall.

We’ve been working on this project for over five years at this point, and feel that our tilt to episodic storytelling, a fiscal sponsor, and workspace are major breakthroughs and will help us move faster and more efficiently. We will update this blog and our Facebook page with news of events and screenings. Thanks for your support and interest.

3 thoughts on “We are Going Episodic.”