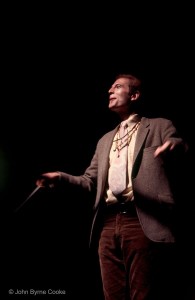 There was a lot we wanted to ask David Ogden Stiers about a wide range of subjects.

David Ogden Stiers was approached twice by Alan Myerson to join The Committee, until he finally signed on in the summer of 1967, performing alongside Don Sturdy at The Committee Theater (“America Hurrah”, directed by Joe Chaikin) and then with the revue players at 622 Montgomery. 1967-68 was a peak transition year for The Committee, when the company was preparing to open up a run at The Tiffany in Los Angeles while maintaining two theaters in San Francisco and expanding its workshop program.

Stiers performed in two Del Close-directed shows at 622 Broadway in late 1967 and early 1968 and it’s a joy to imagine Stiers arriving at Juilliard with an understanding of the earliest beginnings of longform improvisation (The Committee’s fall ‘67 show included a Harold) and the experience of playing with Committee performers old and new, from Garry Goodrow to Gary Austin.

He flew east for Juilliard in 1968, but not before joining in on the fun at The Committee’s June Satirathon, which featured pretty much everybody. That Satirathon was recorded in full, and maybe someday we’ll find a full tape and hear him improvise, or even ask for suggestions. For now, we’ll settle with this gorgeous picture of David Ogden Stiers from that night, shot by the late John Byrne Cooke. RIP.