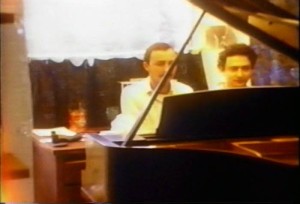 A rare moment with Maestros Milburn and Mathieu. #homemovies #blinkofaneye