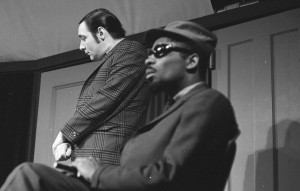 After a long period of anticipation, the stars finally aligned to get us to Austin, TX to interview Latifah Taormina (aka Jessica Myerson), co-founder of The Committee. Latifah is an inspiring figure, and (thank you Latifah) an excellent host!

Her work in spearheading this legendary company with her then-husband Alan Myerson, her later work at The Pasadena Playhouse, and in her role as a leading light of the Austin theater community are all serve as excellent examples of what a motivation, focus, talent, and heart can do in service of theater and comedy.

Over the course of our two hour interview, Latifah broke down how she and Alan visualized The Committee and wrangled the initial investors upon their San Francisco arrival. She went on to talk about how the first cast was assembled, her dual role as company member and new mother, and the company’s method in creating new material, among many many other topics. She also passed along a pile of news clippings that we’ll be digging into for weeks.

We learned so much from this visit, including the fact that we need to schedule a return trip. Latifah is a wealth of knowledge about The Committee, and a delight to spend an afternoon with. Hope to get back to Austin soon.

Latifah’s POV. Thanks to our Austin crew for the help out.

We also can’t resist plugging The Hideout Theatre. We caught their improvised Chekhov show Nothing and Everything and it was superb. If you’re in the area, check this theater out, they won’t disappoint. Thanks to Roy Janik and the cast for the hospitality. Austin TX has amazing improvisational theater.